Led by Executive Director of STEAM School Innovation, Cheryl Hibbeln and Superintendent, Cindy Marten, Michael Goodbody and his team in the San Diego Unified School district are reinventing the way STEAM is being taught starting even before kindergarten. Rooted in extensive research, the team developed an ambitious plan. They knew that if their initiative was going to be successful it would require an approach that would get students engaged and having fun while simultaneously developing their understanding of key concepts. LEGO Education was the perfect fit, with versatile solutions and a holistic design that promotes collaboration and the development of 21st century skills it was an easy choice.


«LEGO Education tools allow kids to shed their labels and find the way that they can express themselves and interact with the world.»


Goodbody’s dynamic team of STEAM architects, Zoë Randall and Lacy Szuwalski began developing a high quality curriculum that was informed by and included LEGO Education solutions. Because they were able to track indicators for the kids they were losing in high school as far back as third grade it was imperative that they get their initiative started as early as possible. With that in mind they went all out in equipping their pre-kindergarten and kindergarten classrooms for success. They implemented LEGO Education early learning solutions including LEGO® Education™ STEAM Park. “We had this dream of, what if we could help students identify their interests early on and develop their love for STEM and STEAM as they go through their K-12 journey with us,” says Goodbody. Now that dream is a reality and 44 of the 119 elementary schools in the district have committed to being STEAM schools. This means students are getting one hour of STEAM instruction at least four days a week. 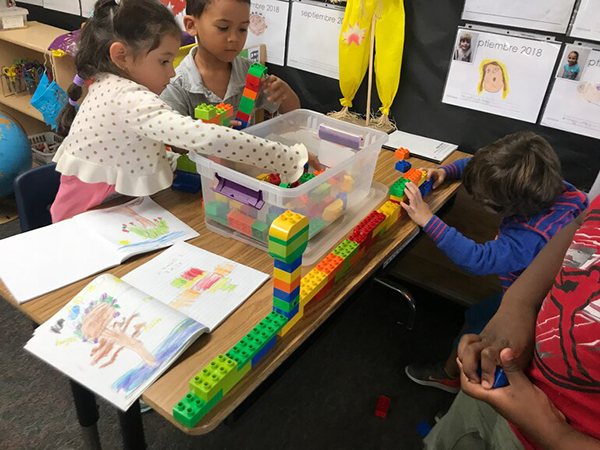 4 : Number of days per week when students are getting at least one hour of STEAM instruction .

Goodbody said that STEAM Park sets have been one of their greatest resources, “They accomplish a lot of goals for us, not only in physical science, but in modeling Next Generation Science Standards.” These Next Generation Science standards have resulted in a huge shift, placing emphasis on the idea of providing students the resources to model concepts. “It’s an opportunity for students to show us how they view the world, and LEGO Education has allowed kids to create scenarios to illustrate things like the interactions between plants, animals, and the environment.” Goodbody says that this kind of learning makes it easier for teachers to assess whether students are grasping content while at the same time fostering conversation and collaboration with their peers. “It’s been a very powerful tool,” he said.

All types of learners are benefitting from this approach. “We’ve seen kids with language learning issues who had not spoken all year making an effort to articulate what they had built,” said Goodbody. This accessibility to all learners is part of the strategy in starting this initiative so early. “We’re really big about addressing those formative years as students are developing a sense of self, we want to make sure that we break down the barriers that society has set up in terms of what is for boys and what is for girls, or who’s an engineer and what do they look like?"


«It’s an opportunity for students to show us how they view the world, and LEGO Education has allowed kids to create scenarios to illustrate things like the interactions between plants, animals, and the environment. They’ve been very powerful tools.»

Goodbody is excited about the future of the program and the students participating in it. “We think there will be measurable outcomes; we’ll see kids’ ability to problem solve reflected in the standardized testing, which is so often the way the public perceives schools and districts.” With this incredible initiative only in its pilot year there’s lot of potential for the future. California has adopted computer science standards that Goodbody expects will soon become a graduation requirement and Goodbody says that means there’s more LEGO Education solutions on the horizon for San Diego.

“One of the products we’re super excited about incorporating is LEGO® Education WeDo 2.0 to get kids started with computer science early on.” They’re also excited for LEGO Education’s newest offering, LEGO® Education SPIKE™ Prime. “I really liked the SCRATCH interface and we’re already thinking about how we can incorporate SCRATCH Jr. and how SPIKE can play a role in that upper elementary area as we start to move into 5th grade.”

There are no comments about this article.

You must login or create a profile to post comments.

Pricing and product availability are subject to change without notice. For more information, contact us [email protected]
²¦¬) | Copyright©